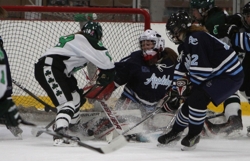 Mary Donovan finds the back of the net, one of two goals she would score on the night

In town to tour local colleges, take in some D1 college games and play the Shamrocks, Appleby College (Burlington, Ontario) found the 19 White team an ungracious host as they were downed 7-1 at Ristuccia Arena. "We played very well tonight, but the score doesn't really reflect the tenor of the game," said Head Coach Josh Hechter "Appleby is a very good team, the pace was fast, and the game close once they got rid of the bus legs. We should have a closer game against them next weekend in Ontario." 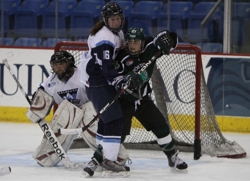 Heather Schwarz battles for position against the Colorado Select. She tallied two goals on the weekend.

After an opening day loss to NAHA, the Shamrocks rebounded with three excellent games over the rest of the JWHL East Division weekend in Connecticut, picking up two ties and a one goal loss. “We could well have won all three games,” said Head Coach Josh Hechter. “We dominated large portions of each game, but we need to finish our chances and minimize our mistakes to ensure we hold a lead and get the win.”

In Saturday’s early game with NSA, the Shamrocks came out strong and peppered the Mountaineers goalie with shots, finally cashing in on a powerplay strike midway through the first. Taking a feed from Sarah Robello (Las Vegas, NV) who was along the end boards, Dakota Woodworth (Carlisle, MA) quickly released a wrister from the left circle that went top shelf. It would be the only goal of the period, and unfortunately, the only Shamrocks goal of the game. NSA came out strong to start the second, and was rewarded just 24 seconds in. However, Madi Litchfield (Williston, VT) held the fort, and turned aside the rest of the shots she faced in the period, and the game, saving 26 total. Despite dominating play and out shooting NSA 12-6 in the third, the Shamrocks could not find the go ahead goal.

The afternoon tilt was a physical affair with Colorado Select; one that saw Colorado amass 28 minutes in penalties. The Shamrocks controlled play for much of the first, however the period ended scoreless. The Select drew first blood early in the second, but the Shamrocks responded with a powerplay goal by Heather Schwarz (Naugatuck, CT) as she put home a Emily Auerbacher (Gladstone, NJ) rebound with just over eight minutes gone in the period. Two minutes later, Auerbacher potted a pass from Woodworth to give the Shamrocks a 2-1 lead. Both tallies were started by the smart puck movement of defenseman Kate Kohl (Chelmsford, MA) coming out of the defensive zone.

With just under a minute to play in the period the Select tied the game on a deflected shot that hit the ice in front of netminder MacKenzie Bruch (Barrie, ON) and then took a huge bounce up and over her glove. On top of her crease to take the initial shot, she watched as the shot, just out of her reach, ticked off the crossbar and dropped down into the net. Despite several powerplays in the third frame, the Shamrocks could not light the lamp. With just over two minutes left, the Select picked up their third goal on a shorthanded odd man rush. With the net empty and an extra attacker the Shamrocks mustered several shots on net, but came up short.

Sunday brought the Washington Pride, and the second tie of the weekend. The Shamrocks jumped out to an early lead on a strike by Schwarz, and then added to their lead in the second when Mary Donovan (Duxbury, MA) found the back of the net. Alas, the third frame belonged to Washington, as they netted two, including a powerplay goal  to earn the tie. Madi Litchfield turned aside 24 shots. 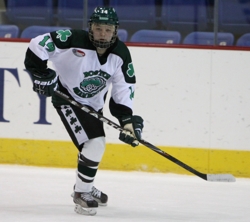 The 19 White team braved the prospect of inclement weather and traveled to the hills of western Connecticut on the last Saturday in October to take on the Connecticut Northern Lights. They were rewarded as they potted nine goals, with 13 players picking up points, including six with multi-point games. “It was a good effort, with pretty much everyone on the roster picking up points,” said Head Coach Josh Hechter. “However, there were times we were complacent, and we were fortunate it didn’t come back to bite us.”

In her first action since the Labor Day tourney, senior forward Sarah Robello (Las Vegas, NV) quickly made her presence known, picking up two goals, including the game winner. Junior forward Dakotah Clement (Berwick, ME) garnered three points, including lighting the lamp by intercepting a clearing pass and breaking in to roof a shot under the crossbar. Adding to her two assists, junior defenseman Kayla Dion (Colchester, VT) used a blast from the point to round out her scoring for the day. 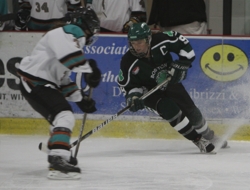 The Boston Shamrocks are pleased to announce the commitment of senior forward and Captain Dakota Woodworth (Carlisle, MA) to Boston University and their NCAA Women’s Hockey East Association program for the fall of 2012. The BU Terriers were 2011 NCAA Frozen Four finalists, losing to Wisconsin in the National Championship game.

“We are extremely happy for Dakota,” said Head Coach Josh Hechter. “Over the past year she has made some big strides, and attracted the attention of a number of top programs. The recruitment process was arduous, and in the end BU turned out to be the best fit of academics and hockey for her.  She is a very talented player whose speed and skill will be an excellent complement to the Terriers’ high powered roster.” 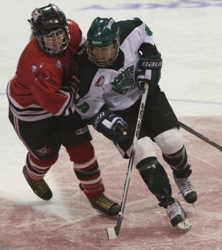 While the 19 White team closed out the weekend with two losses and a tie, there was a lot to be happy with coming out of the JWHL's opening weekend in Boston. "We were in every game, with two of the losses being by a goal." said Head Coach Josh Hechter. "We scored 12 goals, and only gave up 12. Our penalty kill was 100%. We had 14 players pick up at least one point. While there are certainly things to work on before our next games, I am very pleased with the effort and results."

Saturday's early game was a tight affair with the Edge School of Calgary. The Shamrocks struck first on a powerplay goal by Kate Kohl (Donovan, Ade) in the opening period. The Mountaineers came back strong in the second, pouring 19 shots on Madi Litchfield, all of which were turned aside. In the third, the game was tied up on a late goal, and looked to be in jeopardy in the final minute when the Mountaineers were awarded a penalty shot. Rachel Ade, falling on the puck in the crease, was tagged with Delay of Game. However, Litchfield used a deft pad save to keep the game knotted at one.

In the nightcap the Shammies took on the Warner School Warriors in another tightly contested affair. Again the Shamrocks drew first blood, as Grace Kleinbach (Eustis, FL) potted a rebound of a Dakotah Clement (Berwick, ME) shot. The first period ended in a tie, and then the Warriors took the lead midway through the second. Despite six powerplays, the Shamrocks could not pull even with the Warriors. MacKenzie Bruch (Barrie, ON) had 30 saves in the loss.

The weekend closed out with a 5-2 loss to Winnipeg’s Balmoral Hall Blazers. Kim Laspina (Reading, MA) and Heather Schwarz (Naugatuck, CT) had the Shamrocks’ goals, while Litchfield saw two periods of play and turned aside 32 of 36 shots, giving way to Bruch who had allowed one goal on 14 shots.

The Shamrocks next JWHL game is an East Division match-up with NAHA on November 3 at Quinnipiac University in Hamden, Connecticut.

Shamrocks Pick Up Split on First Day of Opening Weekend 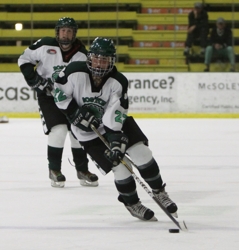 Emily Auerbacher struck for two goals against the Thoroughbreds.

Coming off a loss to the Pacific Steelers in the morning game at Ristuccia, the Shamrocks were looking to redeem themselves in the nightcap against the Minnesota Thoroughbreds at UMass-Boston. Redemption came in spades, as they hung a 7-1 pasting on the T-Breds.  Six players had multi-point games, with Dakota Woodworth (Carlisle, MA)  picking up three assists. "It was a total team effort, and everyone was in sync with one another." said Head Coach Josh Hechter.

With help from defenseman Rachel Ade (Davenport, FL) forward Mary Donovan (Duxbury, MA) got the scoring fest underway with less than three minutes gone in the first frame. Two minutes later Heather Schwarz (Naugatuck, CT) would pot what would turn out to be the game winner, with a hand from Cassy Opela (Penfield, NY) and Donovan.

After some back and forth play for half the second period, Emily Auerbacher (Gladstone, NJ) made her presence known with two strikes two minutes apart. Newly arrived from the recently defunct Minnesota Crunch, defenseman Sam Mead (Hazen, ND) picked up her first point as a Shamrock, while Ade added her second point of the game. Kim Laspina (Reading, MA) got on the scoresheet as well, taking a feed from Woodworth and passing to Auerbacker for her second. With just over two minutes left in the second, Hayleah Barbieri (Plainville, MA) lit the lamp on her first, as Woodworth tallied her second helper.

It didn't take long in the third for the Shamrocks to strike again, as just over three minutes in Barbieri again found the back of the net, this time thanks to the smooth passing of Gracie Kleinbach (Eustis, FL) and Abby Angelosanto (Kensington, NH). The seventh and final marker resulted in Woodworth's third point of the game, and Schwarz's second goal. MacKenzie Bruch (Barrie, ON) picked up the win. 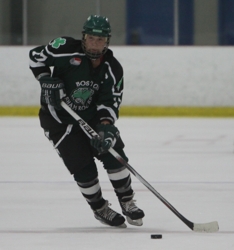 After nearly a month since their last game, the Shamrocks 19 White team returned to action at the Harvard Invitational tourney held at Bright Hockey Center on Harvard's campus. Despite the time off, the team quickly came together and picked up two wins in their four game set.

"I was very happy with the way we played this weekend." said Head Coach Josh Hechter "We could very easily have come away with four wins. We played hard, and shook off the rust, and it was a good tune-up for the JWHL kickoff  this coming weekend here in Boston."

The Shamrocks opened play on Friday night, giving up a late goal to lose 2-1 in a tight battle against the East Coast Wizards. Defenseman Rachel Ade (Davenport, FL had the Shamrocks lone goal. The next morning they dropped a 3-2 decision to the Pittsburgh Pens Elite, with Dakota Woodworth (Carlisle, MA) and Kayla Dion (Colchester, VT) picking up goals, each assisted by Jenna Redford (Soldotna, AK).

Saturday night a goal in the last minute by the Mass Spitfires necessitated a shootout. While the Spitfires were ready to settle for a tie, the quick thinking Mary Donovan (Duxbury, MA) recited the rules found on page 1 of the weekend's program book, prompting the refs to call for the shootout. Rachel Ade was the first shooter and scored, while all three of the Spitfires attempts were turned aside by Madi Litchfield (Williston, VT). Hannah Schwarz (Naugatuck, CT) and Woodworth had the other tallies in the victory.

The White team  closed out the tourney with a convincing 3-1 win over the East Coast Wizards U16s on goals by Redford, Kim Laspina (Reading, MA) and Ade, who also picked up a helper on Laspina's game winner.