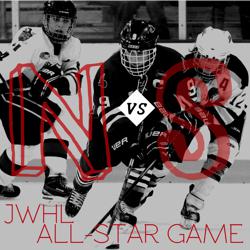 WASHINGTON D.C. - The Junior Women’s Hockey League has announced the full roster of players for the 2016 JWHL All-Star game, which will be held February 11 at Kettler Iceplex in Arlington, VA

The All-Star game will kick off the 9th annual Challenge Cup featuring JWHL teams and other top girls teams from across the US and Canada.  The event is supported by the NHL's Washington Capitals and will again be held at Kettler Capitals Iceplex and Rockville Ice Arena from February 12-15, 2016.

“We’re honored to be here" stated JWHL co-founder, Bill Driscoll. "From the JWHL All Star game on Thursday through the Championship on Monday, this will be some of the best female hockey that will be played in the world.  Top teams with world class players in world class facilities, it’s the highlight for teams and players in their season.”

This year, 38 teams  will compete at the U19, U16, and U14 divisions over the course of 4 days.  The JWHL Challenge Cup is one of the top scouting opportunities for NCAA programs as well as Hockey Canada and USA Hockey.  Over 8,000 players, parents, and spectators are expected to participate in this years event.

In addition to the All-Star Game and tournament, the Washington Capitals and JWHL will be hosting a free girls clinic on Thursday Feb. 11th at 6:50PM.  More information will be available at capitals.nhl.com or to keep up on all the action go to www.jwhl.org/cc or follow the JWHL via social media for all schedules, rosters and game updates.

Below are the complete rosters for each division, composed of twelve forwards, six defensemen and two goaltenders per team. Note this roster is only for the All-Star Game, the JWHL 1st & 2nd Team All Star Selections will be voted on by league members and announced at the 2016 JWHL Awards Banquet on March 4, 2016 in Buffalo, NY.